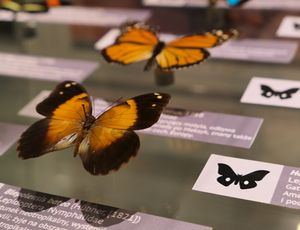 The history of the zoological collection dates back to 1782, when the Cabinet of Natural History was originally established. Many specimens from that period are still in the collections of the Zoological Department, and numerous of these exhibits can also be seen in the zoological part of the exhibition.

All zoological collections can be divided into three main categories.

The first are the exhibition specimens, often historical, including dry and wet preparations. These represent the majority of types of organisms present on Earth today. Insects, arachnids, crustaceans and molluscs are the most numerous among the exhibits among invertebrates, while fish, reptiles, birds and mammals represent vertebrates. Many of the exhibits represent species are currently at risk of extinction, rare, and yet interesting from the standpoint of biology, such as the kakapo parrot, sea cow skull, Galapagos turtles or hatteria. Many specimens belong to a collection whose history is closely connected with the history of the Jagiellonian University and the activities of many well-known naturalists, such as the collection of Brazilian birds from the period of Austrian partition, as well as the collection of crabs and coral reef fish. The collection of shells of molluscs donated by Bolesław Rączka – an amateur collector who devoted his whole life to journeys connected with his passion – is also extremely valuable. The number of exhibits is estimated at more than ten thousand specimens.

The second group is made up of educational specimens, which comprise models, anatomical preparations of organs and systems, cross-sections and many other materials used in the past to teach biology students. These days, they mostly serve solely historical purposes, and in the majority of cases they are not used in the course of studies, although many of them are an important part of the educational exhibition.

The largest part of the zoological collection is made up of scientific materials, stored in stores accessible only for researchers. The majority of them is made up of butterflies – this collection numbers more than 400,000 specimens. These materials were gathered in the course of numerous research projects, scientific expeditions, exchanges between various entities, as well as thanks to donations and purchases. The largest collections were donated by Professor Roman Wojtusiak, Professor Janusz Wojtusiak, Professor Jarosław Buszko, dr Tomasz Pyrcz, Pierre Boyer, Artur Jasiński and many others. They have been arranged in a systematic order according to the zoogeographic division of the world. The most numerous are species from Afrotropical, neotropical and palearctic realms. Many of them are typical specimens, which constituted the basis for the descriptions of new taxa, which have an extraordinary scientific value, coming from many difficult-to-access regions of the world. The remaining insects are represented by a large collection of flies collected in the 19th century by Maksymilian Siła-Nowicki, numerous beetles and a mite collection prepared by Wiktor Micherdziński. One of the most valuable collection presents fish from Antarctica and Lake Baikal, prepared by Professor Michał Jakubowski.

Due to the enormous scope of the collection, many of the specimen require scientific elaboration, ordering, inventory, digitisation and conservation. It is an ongoing process, and the need is further exacerbated by the need to constantly update the state of knowledge, as well as new discoveries.